Becca & Danny are a couple that really know each other well.   During out first consultation together it was evident that they had discussed extensively their plans for their wedding.  It was great to see a couple working together and incorporating each other’s ideas in all aspects of the wedding.  This is exactly what I expect to see when I meet couples.

The colour theme chosen was a striking Teal Blue which they chose to pair with a cool white. The combination was fresh, exactly what you want for a summer wedding.

The venue for the wedding was Warley Park Golf Club, which has a beautiful wedding pier over the lake, an idyllic spot to exchange vows.

Becca & Danny were very open to ideas for their reception set up and we put together some great ideas to make the room pop.

I’m often asked to recommend suppliers and was delighted to be able to refer them to a brilliant florist. Caroline at the Orchid Rooms in Wickford really did create some beautiful bouquets for the bridal party along with button holes for the groomsmen.

As the ceremony was to be held outside, with the congregation to sit on wooden benches, Becca asked me if I could make some matching cushions for some of the elderly guests to sit on.  This challenge took me six months to complete but it was worth it. 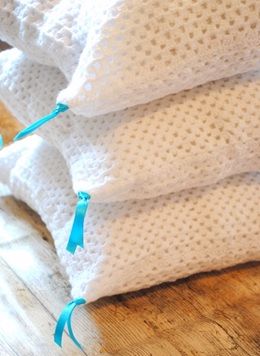 Continuing with the Dior Bow theme, the couple decided to have their seating plan on my light up tree.  It’s a great way for guest to break the ice and chat to each other as they searched for their names on the tree. 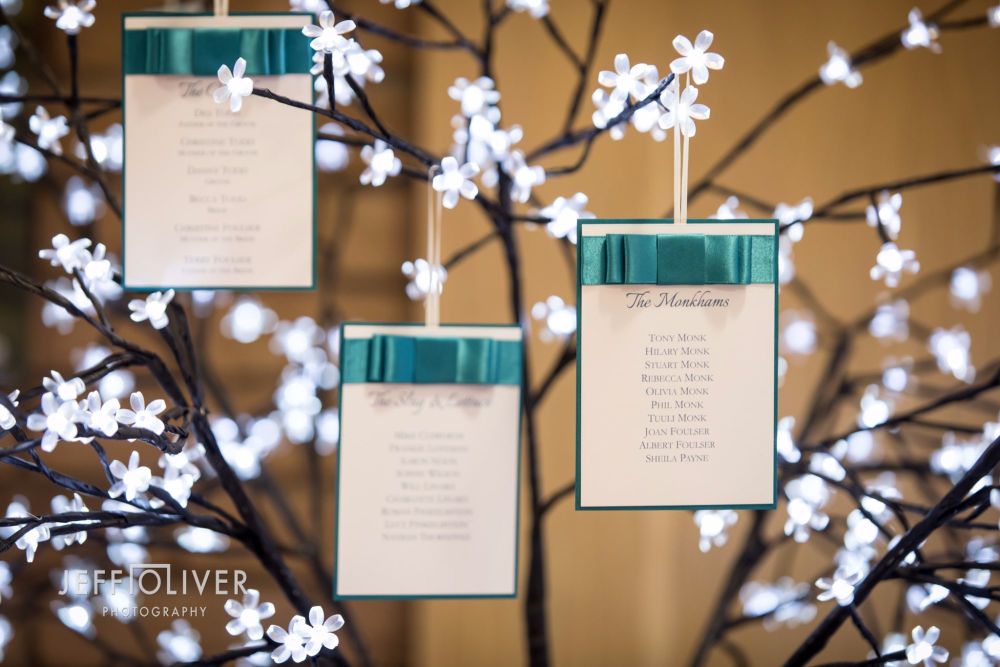 Becca & Danny chose their favourite pub names for the table names and again these followed the Dior Bow theme. 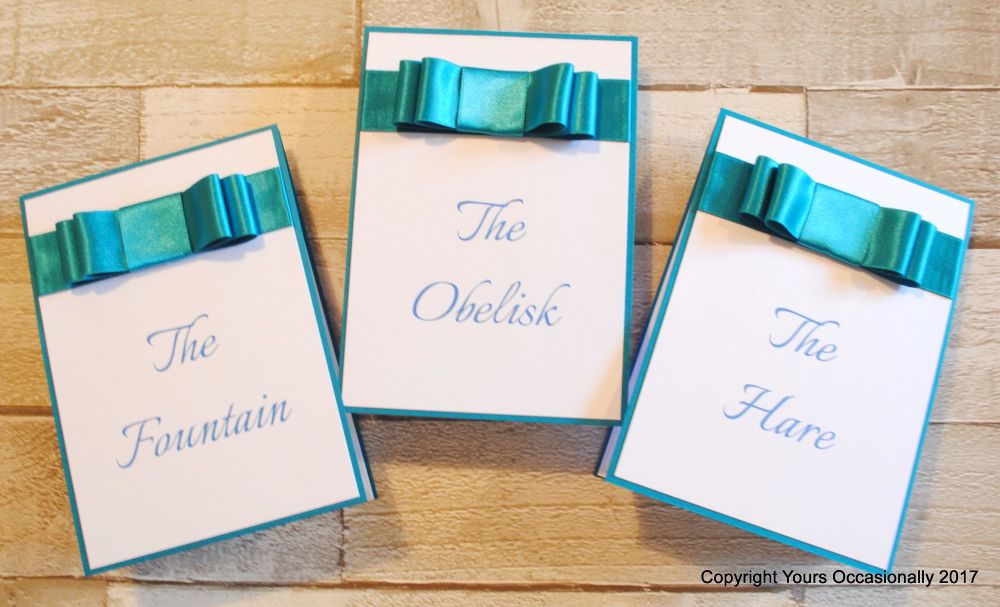 For the place name cards, they wanted to double them up with the favours, so I made them scratch card wallets with the guests’ name on the front and a message from the happy couple on the reverse. 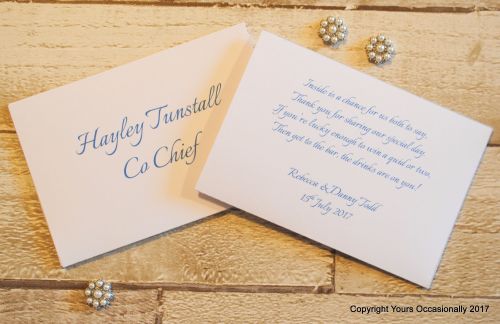 Becca & Danny asked if I would set up the venue for the day.  I readily took them up on their request as this is something I don’t get to do often.  I enlisted the help of professional florist Claire from Bliss Flowers or Cranham to make sure that the flowers in the vases and fish bowls were displayed properly and placed carefully in the vases. 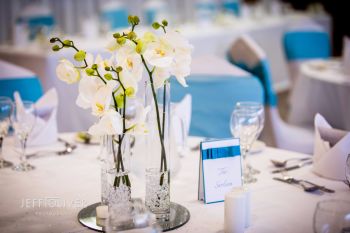 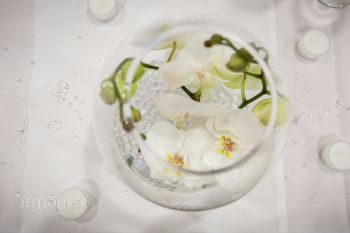 The pier where the ceremony was to take place was bedecked with white ribbons, and cute flower balls.  There were hand written signs directing the guests to the ceremony area, and cushions laid out in a basket for guests to help themselves too. 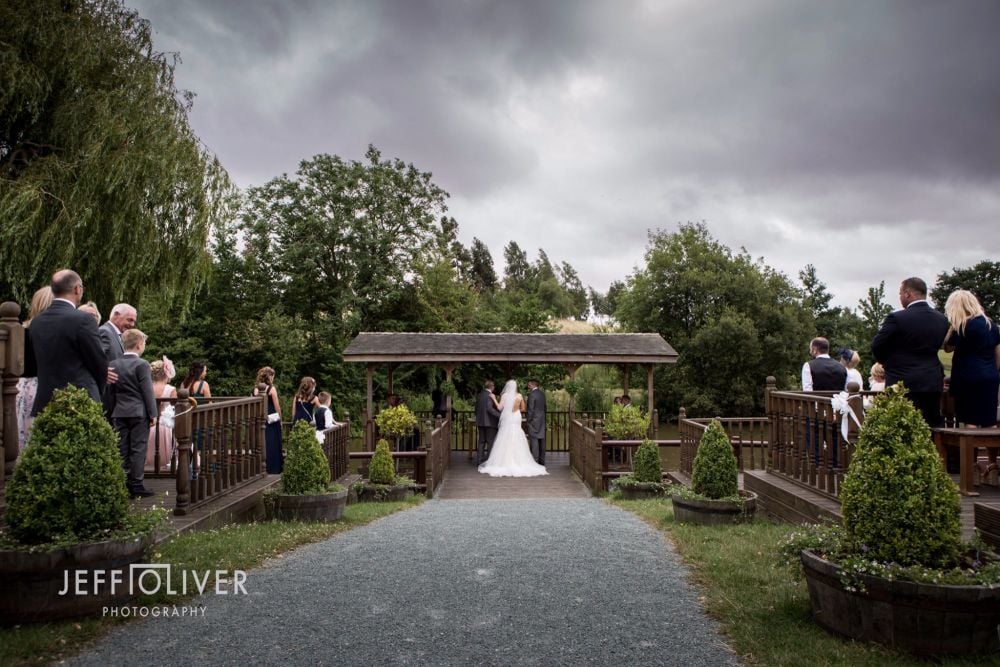 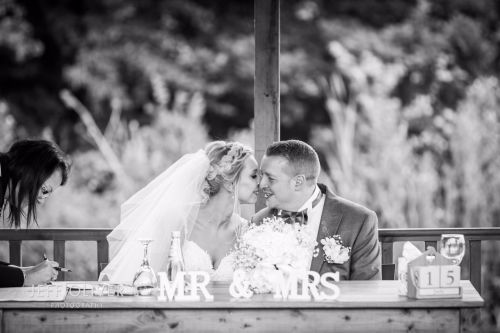 Becca & Danny catered brilliantly for the children, they had fabulous Lego favours, colouring books, and so much more.   One of my set up duties was to put the cake together, a task I’ve not undertaken before.  It was a nerve-wracking moment, carefully placing the chocolate rings over the cake and placing them on each tier.  I guess I can confess now that the wedding is over, that I tripped and threw the chocolate rings across a table and somehow, they still survived! 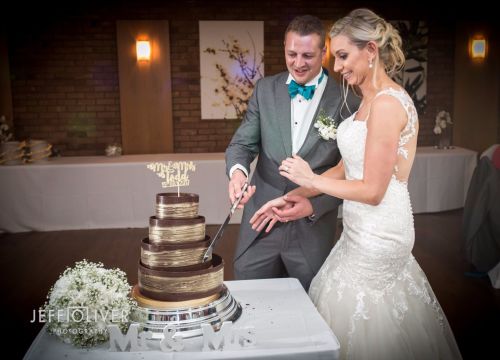 To really light up the room in the evening the couple had the fabulous light up letters from Racheal at the Party Organising People.  They were a great statement piece to have photos in front of. 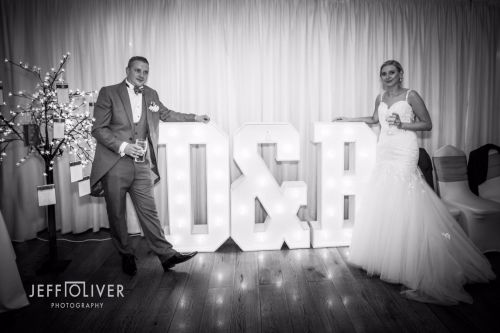 I was lucky enough to be at guest at Becca & Danny’s wedding, it was a full-on day, at the venue in the morning to set up and then back again as a guest.  It was worth it though.  As a stationer I barely get to see the fruits of my labour, but to be able to set up and then be a guest and see everyone else’s reactions to the venue was fabulous. 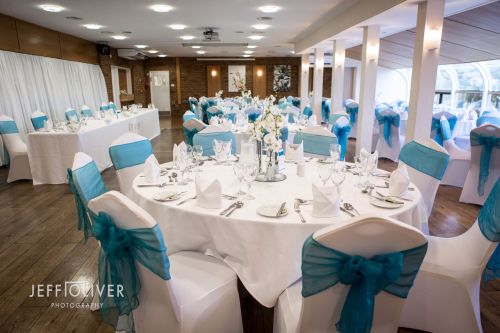 Most of these photographs have been kindly supplied by the fantastic photographer, Jeff Oliver.  He really did do the wedding justice with his amazing photographs.  It’s always a pleasure to see fellow wedding suppliers in action and Jeff really seem to put Becca & Danny at ease and the love certainly shone through in their photographs. 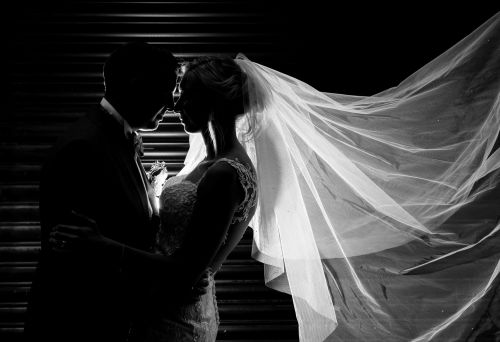 Thank you to Becca & Danny for not only inviting me to your wedding, but to allow me to be so involved.  It was a pleasure planning with you both from beginning to end you are a really fantastic easy-going couple to work with.

Here’s to a happy and healthy marriage. 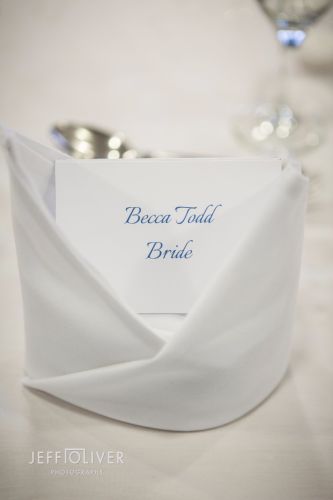 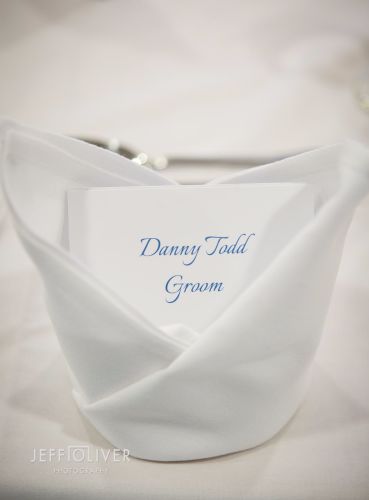